Tomorrow, the plum will be 12 weeks old, and he/she weighs about a half an ounce. The sex of the baby has been determined, but we won't know what it is for another 6 months! I've been feeling really good, except for still being ridiculously tired. If I don't get at least 9-10 hours of sleep at night, I'm a zombee at work. I haven't thrown up but I do get naseated if I don't eat in the mornings. And I've been gaging on my gum, while brushing my teeth, when I get too tired, early in the morning, from the smell of my car, and now when I just look at my car I gag! Isn't that stupid? I see car like mine driving down the road and I get a lump in my throat like I'm going to vomit! Something weird I never thought would happen.

I'm starting to get a little gut! I don't look pregnant, just chubby. That's OK with me. Ben and I read the pregnancy books every Thursday night to find out what kiddo is doing the upcoming week. I think he'll be more excited when he can see more changes in me. I know he'll be a great dad, he's already a great husband. Well, talk to you next week!
Posted by Bakken Board at 4:59 PM 2 comments: 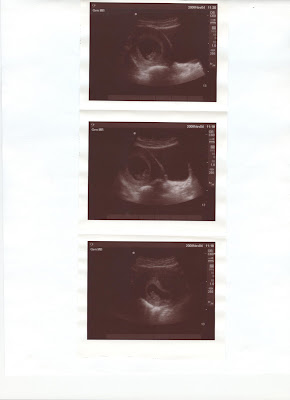 Ben and I are going to have a baby!!!!!!
My due date is June 5, 2009 which makes me 10 weeks on Friday.
Ben came with me to my first doctors appointment Tuesday morning and everything went very well. The baby looks good and was wiggling all around during the ultrasound. The doctor also confirmed there is only ONE baby.
We spilled the beans to both sets of parents last night. We had waited so long to tell them which made it a really fun evening. Grandma Val can't wait to be a Grandma again and Ben's Dad was excited to get to baptize another Grandchild!
We made special trips to both parents houses and after some casual conversation, Ben handed the mom's the ultrasound pictures. Ben's mom Avonne, looked at it and thought it was something we had found in a box in the garage (becuase we were cleaning out there eariler in the afternoon)! Then she looked at me and I smiled. She started crying and there were hugs all around! My mom looked at it for a minute, then looked at Dad and realized what she was holding!! She started crying as well and so did I.
Shortly after that, I had to go to band practice. So I left and told the Loose Cannons there will be an addition to the band next Spring! There were all so happy for us.
Posted by Bakken Board at 8:20 AM 7 comments:

Bakken Board
-We have been married for 5 years and have two little boys named Griffin and August. This is a fun way to keep in touch with our family and friends.